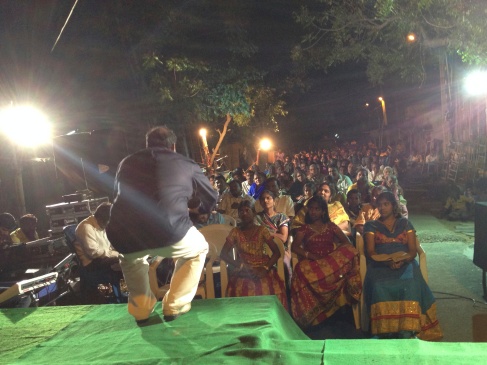 There is something about preaching the pure unadulterated gospel that leaves one in total awe of God.  It is knowing that the power of God to salvation is being shouted across the city to listening ears.  Somehow, the fact that I am a white westerner with a title and banner makes the people pay attention more.   For that I am grateful, because as my voice booms out over the streets and Pastor Rajendra’s  translation doubles the effect, it lends so much more credibility to the message.  And it is the message that is important.  That’s the dynamite of God, blasting away spiritual strongholds.

Preaching in the open air on a raised platform to a packed closed off street seating 600 people was certainly the highlight of this week.  The SAC church invested heavily in this event.  It marked the 20th anniversary of this little church on this little street in the slums of Vijayawada.  After taking all day to set up platforms, sound systems (donated from Canada), and laying out 600 chairs, not to mention cooking a full meal for 600 people, the celebration crusade began.  It would be 1:30 am before we got home, buy wow what night.  The seeds of the gospel were sown, the neighbourhood was fed and the message that Jesus Christ loves them was indelibly etched on this community.

May many come to freedom as a result of sowing these seeds.  May His kingdom come on this little street.

I am humbled by what God id doing in this city.

This has been a much quieter week. The postgrad seminar students have left the campus and we were back to just the undergrads.  The staff here were gracious enough to allot me me 4 blocks of 1.5 hours each afternoon as well as the Community Chapel on Wednesday.   Having my own apartment, also allowed me to do some cooking and escape the “huge pile of rice at every meal” syndrome that is part of life in India.    The campus truly is beautiful, a gem on the outskirts of the bustling city, where a leisurely walk to the village of Rysandra becomes a daily retreat.  The forest that the path goes through is full of Eucalyptus trees and a favorite routine is to grab a bunch of leaves and crush them in hand, releasing the Eucalyptus oil that smells so wonderful and soothes the sinuses, dried out by smoke pollution from the city.

The undergrad students are a remarkable group from all over India and Myanmar, totally devoted to Christ and their calling.  I was undecided as to what to do with them, so I gave them four options on Monday and allowed them to vote.  This resulted in a tie between a series on How to Share Your Faith and Discovering Your Ministry Profile.  After praying, we cast lots and it was the Ministry Profile that came up.  It has been such a blessing to watch the students figuring out their spiritual gifts, passion, personality and abilities and putting it together to hone in on their calling.  We wrapped the course up in three sessions; so today we are ending with a session on sharing the gospel.  Thursday night, I showed the film Courageous, a wonderful production focusing on the importance of Biblical fatherhood.

Today, I head back to the city and fly out tomorrow to Vijayawada, where Pastor Rajendra has me speaking in no less that 5 churches on Sunday.  I am really looking forward to seeing the children in the Orphans’ Home.  They are so precious.  I will also joining him on a road trip where we will take in and Indian wedding.  I hope to connect with James Johnson who has just arrived in India and is also serving at an orphan home not too far from Vijayawada.

I have also had some time this week to work on my new book “Get in the Boat”, a light-hearted look at sailing as a metaphor for the Christian Life.   Look for an excerpt soon.

The amazing thing about trips like this is that we don’t ever know what impact our conversations and sharing will have.  Last Saturday night, I was in a restaurant alone, so they put me at a table with another couple.  Before the meal was over, we were sharing food and I was able to tell this Hindu couple the gospel and my testimony in a way that left them intrigued and thinking. Who knows what the Lord will do?  We see so little of the puzzle, but he puts it all together for good.  Each one of us is a agent of the King of Kings, the God of Love.

The Lord has been good.  It has been a restful week and I have enjoyed the weather and the spiritual climate on campus.  I have a feeling that this week has been a respite in advance of a hectic couple of weeks ahead as I do a fair bit of travelling.  May the Lord use each one of us wherever we are.

I appreciate your prayers. 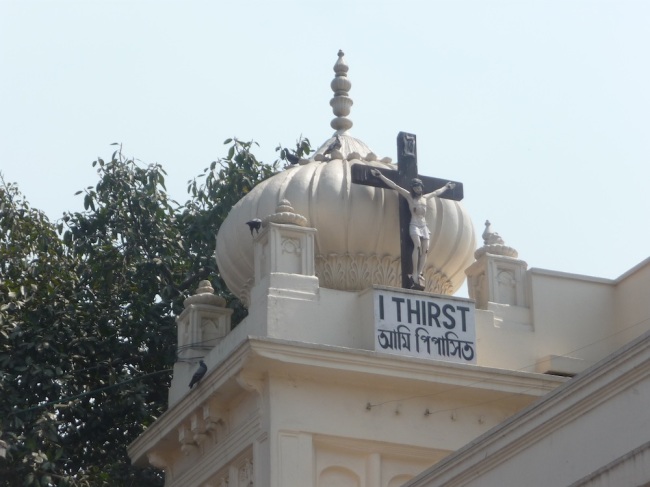 It has been just over a month since our very close friend Maxine was taken to Glory.  During that time, we hosted our entire family – all 13 of us (including 7 kids under the age of 10) for Christmas, moved my wife’s 93-year-old mother to a new residence, saw everyone off, got rid of the decorations and I began to think in earnest about my upcoming trip to India.  January cold has always tended to clear the head, but this year grieving seems to muddle it and takes the zip out of any sort of ambition. A nasty head cold contacted just a few days ago has dealt yet another blow.  But today I am actually up and around and so life goes on.

One thing that Maxine’s death has left me with is a rekindled fear of God.  Watching someone you love come to grips with their own death as a reality, not just a theory, pretty much takes the wind out of your sails.  Impending death moves a person to get serious about making things right. Ancient wrongs get confessed (yet again), and Satan mocks our normal self assuredness, as we come to grips with the reality that God really does hold our lives in his hands.  I remember in one of our small group exercises, I asked people to spend ten minutes reflecting on their own deaths: imagining the scenario, the family, the arrangements, thinking about what people would be saying.  The point of the exercise was that the best way to live is really to die, that is to die to self.  But imagination and experience are two very different things.  The night that Maxine died, I was shoved into an awesome fear of God.  Not a terrorist type of fear, but a holy reverence laced with the realization that I too could be called home at any time.  And was I ready?

It’s not the kind of thing that you can share with people because the world is full of theologians of Glory.  This phrase, coined by Martin Luther, is used to sum up all theologians other than those of the Cross.  Theologians of Glory  will always call evil good and good evil.  Human good works, for example, are considered by theologians of Glory as good and commendable.  Theologians of the Cross will always say what a thing really is.  Good works, says Luther, done apart from a reverent fear of God are in reality deadly sins.  They take us away from the “naked trust in the mercy of God”  and place our confidence in them and their doers.  The problem is that none of our works, even those done with divine grace are sinless.  How can they be?  We are sinners to the core.  Fully justified as well, of course, but only by the mercy and suffering of God himself.  And so everything I do, even writing this post, must be done with absolute humility, trembling and fear of God.  God forgive me for those times when I have been self-confident and even arrogant.

The fear of God does not play well on today’s theological landscape.  It is seen as much too negative, too depressive.  Yet it is the greatest good.  “Do you not fear God?” says the one thief on the cross to the other.  Obviously he didn’t for he continued to rail at and mock the LORD.  Yet the one who feared God was transported that day into paradise with Christ.  “The fear of the LORD is [just] the beginning of knowledge” (Prov. 1:7).  So everything I do must be done under the umbrella of a holy reverent fear of God.  If I ever get away from that, I am done.  Luther writes:

To trust in works,which one ought to do in fear, is equivalent to giving oneself the honour and taking it from God, to whom fear is due in connection with every work.  But this is completely wrong, namely to please oneself, to enjoy oneself  in one’s own works, and to adore oneself as an idol.  He who is self-confident and without fear of God, however, acts entirely in this manner.  For if he had fear, he would not be self-confident, for this reason, he would not be pleased with himself, but he would be pleased with God.” (Luther’s Works, ed. Jaroslav Pelikan and Helmut T. Lehnmann (Philadelphia Fortress Press, 1958-72), 31.46)

Oh, that there would be so much more fear of God in everything that is done in his Name!

And so that sets the stage for my upcoming trip to India.  I confess that I have not been all that excited about going this time around.  One reason is that my dear wife will not be accompanying me.  She really is my strength in social circles.  And true to form in any trip to India, I am not sure exactly what I will be doing there.  I have some vague ideas, but in India everything always comes together at the last-minute, and so it will again.  I have also had some physical issues to deal with over the last few months.  And so I guess that this sets the stage for “naked trust in the mercy of God” and so off I will go.. next Tuesday.

Stay tuned for more life lessons along the way.  May the Lord of all mercy and grace, the God of compassion who inspires awe and holy fear, be with me and with us all.